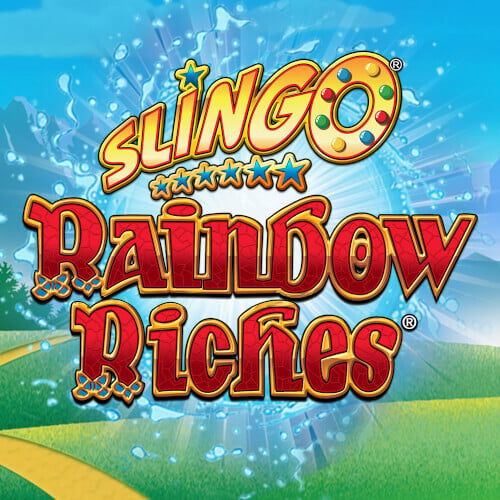 Frequent players will recognize the setting instantly. That’s because Slingo did a great job of maintaining the consistency of the original Rainbow Riches game to give the feel of continuity and familiarity. You have the bright blue sky, rolling greenery, and of course, the iconic laughing leprechaun appearing to the side of the reels. But there are some cool new additions that won’t go unnoticed.

The Slingo Rainbow Riches slot is played on a 5×5 grid. But instead of a long line-up of characters, the board is populated by numbers. Your job is to complete a line with the numbers that are at the bottom of the screen. This is a really fun variation on the usual slot gameplay. The colours, symbols, and music all add to the jovial atmosphere that the Slingo Rainbow Riches game is attempting to create.

The Slingo Rainbow Riches slot game has a massive jackpot of 200,000 coins. You can earn this by hitting the Full House bonus feature and earning the biggest multipliers possible.

Playing the Slingo Rainbow Riches slot online game is not like your typical slot machine gameplay at all. It resembles more of the bingo-style gaming than slots, but it incorporates aspects from both games just to keep things interested. In short, your goal is to get a line of numbers fast, as you do in regular bingo. Lines can be made horizontally, vertically, or even diagonally. Lines are made up of five numbers in total.

Sounds simple, right? But there are a lot of twists that keep this game anything from static. Here’s how to play the Slingo Rainbow Riches slot machine craze:

The Slingo Rainbow Riches slot online game is exciting, and a fun twist from the original version. Plus, the bonus features keep things very interesting for punters who like a challenge.

While there aren’t the same variety of reel symbols you’re used to seeing in a traditional version of slot machine, the Slingo Rainbow Riches slot game comes with a friendly leprechaun, laughing clown, wishing well, magic toadstool, and pot of gold just the same. So, you’re not missing anything in terms of authenticity or theme.

There’s also a joker symbol that lets you cover up any number you like on the row that the symbol appears on. Taking this idea one step further, the Slingo Rainbow Riches slot machine also has a Super Joker symbol. This one will let you mark off any number on the entire screen. Unlike other slot machines, though, the Slingo Rainbow Riches slot has a tricky symbol, as well. The devil symbol will actually block you from getting a line completed. So, avoid these at all costs. There is also a free spin symbol that will add another spin to your total if it appears.

The Slingo Rainbow Riches online slot game has a bonus feature chart that you can follow on the left side of the reels. As you can see, scoring 1, 2, 3, or 4 lines doesn’t amount to much in this game. But if you manage to get five lines filled, you’ll trigger a bonus round. There are seven bonus rounds you can trigger, and the chart shows you which feature you’ve earned, depending on the number of lines you’ve completed. The bonus rounds have multiple levels that you can trigger, and each one comes with a more alluring prize than the level previous to it. Here are the bonus game options:

Each bonus round comes with a hefty multiplier. In the Full House bonus round, you can score anywhere from 50x to 1000x your stake! That’s triggered by getting all of the board lines covered in a single round.

The Slingo Rainbow Riches slot machine also has a Play On feature. This allows you to continue playing your game for a price. Otherwise, you can collect payment for the wins you have made so far and start a new round.

The Slingo Rainbow Riches slot game hails from the innovators at Slingo. While this creator may not be as familiar as some bigger igaming brands, Slingo is a software developer that took the idea of combining two favourite gambling games into one colossal creation. Joining together slots machines and bingo games, Slingo offers a fun variation on these popular themes. Other innovative titles from this software developer include Slingo Cascade, Slingo Centurion, Slingo Reel Extreme, and roughly 2000 other winning games.

The Slingo Rainbow Riches online slot game is available on both desktop and mobile devices. Slingo games are designed to be played on tablets and mobiles using any operating system, including iOS, Windows, and Android devices.