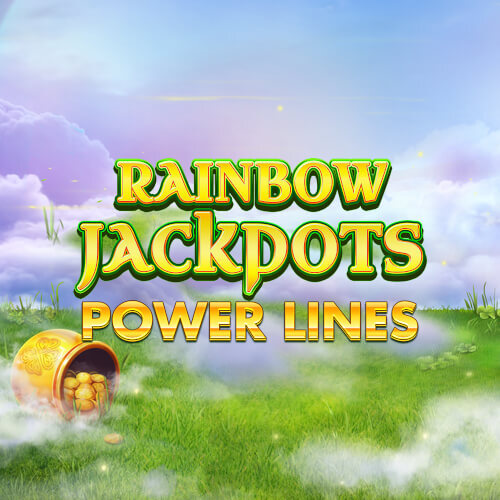 Rainbow Jackpots Power Lines is another online slot using the familiar lucky leprechaun theme. To be honest, it’s not the best version we’ve encountered, but it’s still an entertaining online slot with plenty of varied features and diverting special characters.

The number of paylines available changes each time you spin, which can take some getting used to. These are the Power Lines that are in the game name, so you can have anywhere from 4 to 49 paylines going at once.

Although there are many Irish leprechaun-themed online slot games, Rainbow Jackpots Power Lines is appealing. The screen is brightly-coloured, with plenty of green shamrocks, blue skies, and piles of leprechaun gold.

The folksy soundtrack is typically Irish, but it’s quite pleasant and won’t turn into an earworm that drives you mad for the rest of the day.

Although there’s a decent maximum payout of 1000x your stake, which is well worth it if you’ve bet the maximum of £100, Rainbow Jackpots Power Lines doesn’t have a huge jackpot, despite the name. However, you do stand a chance of winning the Red Tiger Gaming progressive jackpot, which is shared across all of their online slots and amounts to a decent haul if you get lucky.

That said, there are plenty of fun features, like the free spins, pick me prizes, and leprechaun symbol swaps that pay out pretty frequently. With a minimum bet of 10p, Rainbow Jackpots Power Lines does offer enjoyable entertainment and the hope that you might win a sizeable prize.

It’s easy enough to get started with Rainbow Jackpots Power Lines. All you need to do is to choose your stake and click the Spin button to kick off the action. You’ll get a payout when you match a line of 3, 4, 5, or 6 symbols on a payline.

Fortunately, Rainbow Jackpots Power Lines does have an autoplay function to make things a little easier, and if you’re feeling impatient, you can click the Turbo option for lightning-fast autoplay. You can set the autoplay to continue for between 10 and 100 spins.

Besides the standard A to 10 royals, all of the symbols are Irish themed. There’s a lucky horseshoe, a large green hat, a golden four-leaf clover, and a gold coin for the Wild.

The most unusual and confusing part of Rainbow Jackpots Power Lines is the Power Lines feature. Each reel can have between 2 to 7 symbols on it, which means that the number of rows and paylines is constantly changing, with up to 7 rows and 4, 9, 16, 25, 36, or 49 paylines. You’ll need to keep checking the paylines guide to keep up.

There’s not much strategy that you can bring to Rainbow Jackpots Power Lines, apart from paying careful attention to the number of symbols shown on every reel. However, we can advise you to:

Rainbow Jackpots Power Lines comes from Red Tiger Gaming, who is a fairly new and still quite small game making company, having begun in 2014. Red Tiger mainly offers online slots games, although there are also a few online casino table games in its repertoire.

Rainbow Jackpots Power Lines isn’t Red Tiger’s only leprechaun-themed game. You can also play the regular Rainbow Jackpots game, and another one called Leprechaun’s Magic. All of Red Tiger’s games have rich colours and appealing background music, with smooth gameplay to keep you entertained.

Red Tiger is always careful to make sure that its games can be enjoyed on as many devices as possible, and Rainbow Jackpots Power Lines is no exception. You can play it on tablets, iOS and Android mobile phones, and smart TVs, as well as desktop computers.

Most of the time, the gameplay is just as fast and smooth on a smaller screen as on a full-size computer or TV, but when the reels are packed with the maximum number of symbols, and all 49 paylines are visible, it can get squashed and hard to see easily on a small screen.