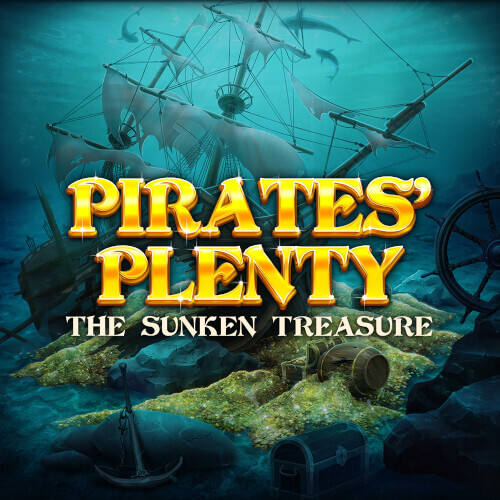 Back by popular demand, the Pirates Plenty Sunken Treasure slot game is part three of this wild and crazy adventure slots series from Red Tiger that gambling fans simply can’t get enough of. Aside from the rousing sound effects, boisterous pirate theme, and exciting graphic animations, the Pirates Plenty Sunken Treasure slots has plenty of bonus features to go around. There are a total of five different bonus games, enough to make any pirate swoon!

The Pirates Plenty Sunken Treasure slot machine was designed with a cartoonish flair. But that does not make it any less entertaining or impressive. The detail that went into this game is absolutely brilliant, and we give full awards to Red Tiger on a job well done. The Pirates Plenty Sunken Treasure game is played out in the private chambers of a pirate ship’s captain. There are piles of gold doubloons, whiskey bottles, and jewels strewn about. A lantern burns wickedly, and a canon seems ready to strike. And of course, there’s a large treasure map marking the spot for adventure.

The reels are set against a wavy blue backdrop, obviously conjuring images of the deep sea. The reel symbols also complement the theme with skulls, canons, and jewels aplenty.

There’s nothing difficult about the Pirates Plenty Sunken Treasure slot online game mechanism. You’ll set your wager, click the spin button, and see if you’ve made a winning combination by landing matching symbols on a payline. If you have, you’ll win the round. There are also specialty symbols that you’ll have to learn, like the wild symbols, treasure maps, and Ocean Spins bonus round symbol.

While the Pirates Plenty Sunken Treasure online slot game is simple enough to play, you will be thrilled at how exciting the bonus features keep each spin of the reels!

The Pirates Plenty Sunken Treasure slots game has plenty of spunk, and the reel symbols only add to the novelty. There are gold doubloons with the various card suits bejewelled onto them. Then, there are even more amusing symbols like the bottle of rum, pistols, canons, pirate hats, and of course, the deadly skull and crossbones. Six of these will reward you with 1000 coins.

There are numerous bonus symbols and features that players are simply going to adore:

Pirate ships are known for being wild and deadly vessels, but these ships are a blessing in disguise. Bottled ships are the wild symbol for the Pirates Plenty Sunken Treasure game, and, what’s more, they act as expanding wilds randomly throughout the game. When this happens, the wild symbol will cover the entire reel. But it gets better. Sometimes, the wild ship symbols appear with multipliers attached, ranging from 2x, 3x, or even 5x multipliers.

The ocean spin symbol is another bonus feature you’re going to love. Get 3 or more of them to trigger the ocean spins bonus game. Scoring pirate symbols at the same time will deliver the keys in your hand to unlock the treasure chests that have sunk down to the bottom of the sea. Whenever a treasure chest appears during this bonus feature, you’ll need a key to unlock it. Each time you do, you’ll get more free spins rewarded. Additionally, low-paying symbols will be transformed into wild cards. Symbols can also become wild symbols (wild symbol bonus feature) during these bonus spins. When you get six of these turned wild symbols, you’ll be awarded with a whopping 1000 credits, instead of the regular payout for a win.

Monkeys are notorious pets for pirates, and the Pirates Plenty Sunken Treasure slot online game is not to be left wanting. The pirate’s monkey symbol is another wild symbol in the game, and it can substitute for any other symbol. You’ll see this chipper primate monkeying about during the ocean spins bonus feature, and you’ll be glad when he’s around. That’s because the monkey steals low-paying symbols, triggers more respins, and gives you opportunities to make winning combinations with only high-paying symbols present.

The entertaining Pirates Plenty Sunken Treasure slot online game comes to you from the Red Tiger software providers. One of the more talented slots machine producers, Red Tiger, is the great brains behind many of our most frequently chosen slots machines, including The Wild Hatter, Vault of Anubis, and Mystery Reels.