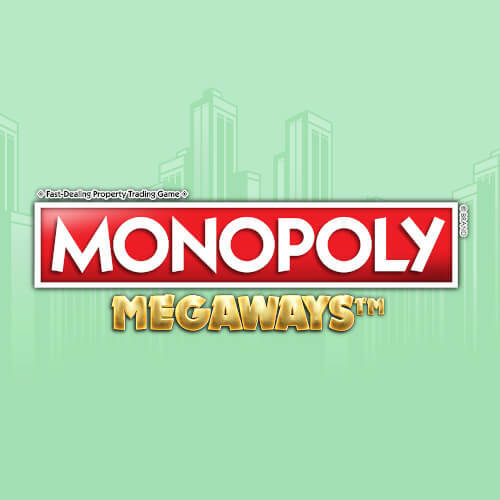 Monopoly Megaways is one of the most popular online slots to come out of Big Time Gaming. It’s a 6-reel game with up to 7 rows, combining the fun Monopoly theme with cascading reels that increase your chances to win and exciting bonus rounds.

It’s a highly volatile game with a tempting maximum win of 15,000x your stake. Bets begin at 20p a spin and rise up to £20. Although wins don’t come often, the gameplay is engrossing enough that you won’t mind.

Monopoly Megaways has all of the traditional Monopoly symbols like the dog, the hat, and the car, as well as a bejewelled M and the crisp and captivating animated Mr. Monopoly figure. It’s played against a background of a classic monopoly board.

Symbols can be stacked at between 2 and 7 per reel, which makes this a Megaways game with over 117,000 ways to win.

Monopoly Megaways doesn’t pay out particularly often, but the biggest jackpot is enough to tempt experienced and novice gamblers alike, with a high payout of 15,000x your stake. There isn’t a huge range of wager amounts, with the minimum bet at 20p per spin and the maximum bet at just £20 per spin, but there’s enough action and diversions going on to keep you entertained, even if you’re a seasoned punter.

The classic Ace to royals symbols are the low-paying cards, but you can get 50x your stake when you match the top value M symbol, and tap into plenty of multipliers in the engaging side bonus games that can boost your winnings sky-high.

Monopoly Megaways isn’t the most simple and straightforward online slot, thanks to the bonus games and innovative animated Mr. Monopoly figure. So, it’s worth reading some reviews on how to play before you start. However, it’s not as difficult to master as you might think.

Like with most slots, you’ll begin by choosing your stake and setting the reels spinning. Since this is a cascading slot, the symbols will disappear after you’ve matched them to make space for more symbols that increase your chances to win.

The real fun begins when Mr. Monopoly runs around the board, filling up the squares whenever you have a winning spin to add to your potential to win even more.

The number cards are the lowest-value symbols, but true to its theme, the highest paying symbols are traditional Monopoly pieces: the hat, the battleship, the dog, and the car. The jewel-encrusted M is the wild, and worth up to 50x your stake.

The most interesting feature in Monopoly Megaways is the Mr. Monopoly, who moves around the board and fills in different squares to generate bonus free spins and multipliers. Here are a few features to look out for:

When your bonus game ends, all of your extra properties, houses, etc. reset, and the board is clean, ready for a new bonus round.

Big Time Gaming was founded in 2011, but the game makers who lead it today have been in the industry for longer than that. CEO Nik Robinson has been working in gaming since 1996, and his CTO Huw McIntosh has been in the vertical for over a decade.

Like most Big Time Gaming online slots, you can enjoy a smooth and impressive online slot experience when you play Monopoly Megaways on your mobile as well as on a laptop or desktop. It’s compatible with Windows phones and tablets, as well as with iOS and Android devices.