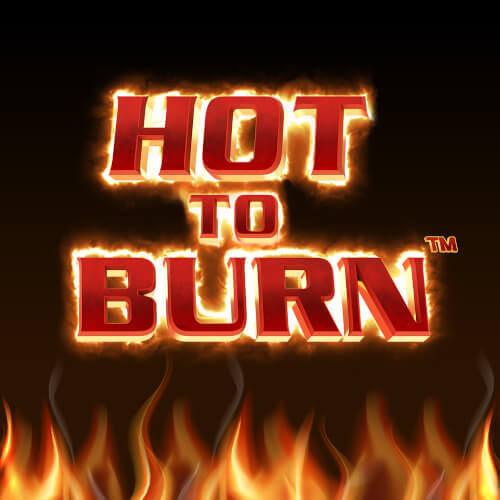 Fans of the retro-theme that brings the colourful fruit machines back into style will love the Hot to Burn slot game. It revisits a familiar scene, the original one-arm bandits that made slot machine gaming so popular decades ago. But even if you aren’t crazy about the kickback theme, the Hot to Burn slot online game will still appeal to the punter inside of you. That’s because it delivers some of the biggest payouts you’ll find anywhere. If you’re hungry for some major jackpots, check out the Hot to Burn slot machine, and try your hand at the lucky 7 brand of gaming.

The Hot to Burn online slot machine is a wonderful tribute to the classic fruit machines that began this long tradition of online slot games. The colours, reel symbols, and sounds all contribute to the theme design, and we can say that Pragmatic Play really did this one nicely.

The Hot to Burn game starts out simple. It’s set up in a 5×3 grid, just like the old games. The backdrop is primarily black, as would be expected. But Pragmatic adds a nice touch by including bright, glowing flames to the bottom of the screen.

The reels are covered with the classic symbols; fruits and 7s. The sound effects are also very similar to the original slot game, further lending authenticity to the Hot to Burn slot machine. But Pragmatic has definitely added a more modern flair to this version. And you’ve got to love how the winning symbols burst into flames, and the fires on the sides of the reels dance to life in celebration.

The Hot to Burn slot online game doesn’t offer much in the way of bonus features. But it more than makes up for that lack in the jackpot department. The Hot to Burn game has a dizzying jackpot of up to 1000x your stake. That means if you wager the max bet of $250, you could walk away with a cool $250,000. Trigger the major jackpot prize by getting five of the blazing orange lucky 7 symbols.

You can do this by clicking on the settings icon and pressing the plus or minus buttons next to the stake amount. This was designed in a rather tedious fashion, especially if you want to get to either extremes of the betting pool (after all, the Hot to Burn game has wager limits ranging from a mere .05 all the way up to 250, so you could be clicking for quite some time!). But that’s our only complaint against the machine.

That’s the circle to the right corner of the screen with the monkey king on it. The reels will start to spin in rapid succession. They’ll come to a stop, and you can see which symbols are revealed.

Getting three of the same kind of symbol will result in a winning combination. How much you win depends on how many of the same symbol you get and what value those symbols hold. Cherries, for example, are the lowest-paying symbol, while the 7 is the highest-paying symbol.

The Hot to Burn slot game doesn’t have a bonus feature, so you can just sit back and enjoy the delightfully-simplistic style of this slot machine.More good news. Since the Hot to Burn online slot game takes its inspiration from the original game, developers kept the gameplay nice and simple. There are no bonus features, no special symbols, and no complicated gaming instructions to learn. For first-time punters or for gamers who are just looking for a casual spin, the Hot to Burn slot is a good option. Here’s how to play the reels if you’ve never done so before:

Hot to Burn Characters and Features

The Hot to Burn slot online game takes all of its design elements from the classic fruit machine. As such, the reels symbols will definitely look familiar to most punters. Ranging from lowest to highest ranking, the reel symbols include cherries, lemons, oranges, plums, strawberries, and watermelons. But the big payday comes with the 7 symbol, with five of these symbols landing you a cool 1,250 coins! Don’t worry if you don’t trigger the 7’s very often. Even the low paying symbols have decent payouts for multiple appearances.

There’s also a scatter symbol for the Hot to Burn slot game. It’s a golden star, and this symbol pays out on any position.

The Hot to Burn online slot game was designed by Pragmatic Play. Pragmatic is known for making some simple slot machines that are nonetheless extremely entertaining to play. There are also more involved slot games like John Hunter and the Book of Tut, Great Rhino Megaways, or Wild West Gold. Recently, Pragmatic Play launched a sequel to the Hot to Burn online slot game called Ultra Burn. If you like the feel of this slot machine, check out the sequel for more action.

Hot to Burn on Mobile

Despite being a back-to-the-basics type of slot machine, the Hot to Burn online slot game is actually designed with the latest in tech innovations. As a result of this, punters can play these slots from any mobile device, including your tablets and mobiles running iOS and Android operating systems.