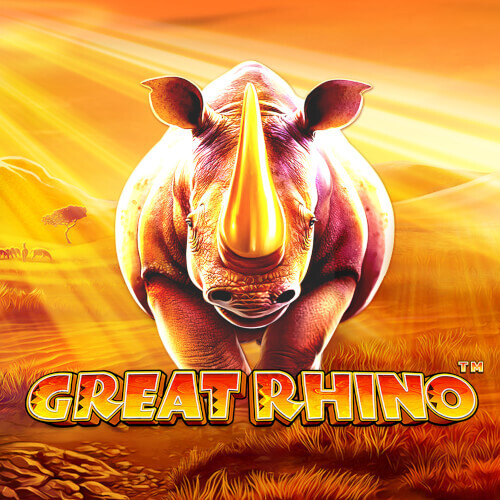 Get ready for a wild adventure ride across the African safari in the Great Rhino slot game. The scene is set for a thrilling exploit under the sun with wild animals racing alongside you, free spin rounds that trigger frequently, and a cool super respin feature. The Great Rhino slot online game even has two jackpot prizes that players can win at the end of the super respin feature. With 20 paylines, medium volatility, and a wide range of betting options, gamers can really get comfortable playing this exciting slot machine. See if you have what it takes to make it in the African sun playing the Great Rhino online slot game today!

The Great Rhino slot machine is set in the African savannah. The scene opens up on a sprawling terrain that’s bathed in golden sunlight, transforming the entire view. Patches of grass dot the screen with wildebeest feeding on this tasty snack. The music that plays along while you make your wager choices is upbeat and friendly, with the occasional animal screech or grunt thrown in for good measure.

The reels themselves have a golden frame and the Great Rhino game title bookended by the two jackpot prizes. When you create a win, the combination symbols are highlighted in a golden fire and pulse. The music also gets livelier. That’s low-valued symbols, but the higher-valued symbols are far more exciting. Animal-triggered wins create a fun array of animations and sounds sure to delight players.

The Great Rhino slot machine is a five-reel, three-row machine with twenty paylines.

There are two progressive jackpots associated with the Great Rhino slot game, a Grand and a Major jackpot. The Major jackpot is a fixed amount of 375x your wager amount. A nice sum to be sure, but it’s not as big as the Grand jackpot. This kitty will award you with 500x your wager if you are lucky enough to win it. Trigger the Grand jackpot by getting 15 Great Rhino game symbols during the super respin bonus feature.

Playing the Great Rhino online slot machine is easy to learn in just moments. Here’s how:

Do this by either going to the wager section in the settings menu or by clicking on the plus and/or minus buttons next to the spin button.

Click on the spin circle to start things in motion.

3 or more matching symbols on a payline will reward you with a win.

Now, get ready for some real fun in the super respin bonus rounds!

The Great Rhino online slot game isn’t just about catchy tunes and fun animations. There are also great bonus features. But let’s talk about the reel symbols first. The basic symbols include the ace, king, queen, and jack. These are loosely designed to appear regal and African in nature. The higher-valued symbols are all animals. They include flamingos, jackals, crocodiles, leopards, and of course, the Great Rhino game mascot.

The Great Rhino slot game also has a wild symbol, a Great Rhino coin in blues and yellows. This can substitute for all symbols except the bonus symbol. Meanwhile, the bonus card is the symbolic safari tree, and only appears on the 2nd, 3rd, and 4th reels. Get three of these symbols to trigger the free spins bonus feature.

When you trigger the free spins bonus feature, you’ll be awarded ten free spin rounds. During these free spins, all of the Great Rhino game symbols will be considered wild and act accordingly. That means this symbol will now be able to fill in for other symbols to create a winning combination, and the Great Rhino slot symbol will also pay according to the wild pay table.

Even more exciting is the super respin bonus feature. You can activate this feature by filling up two or more full stacks with the rhino symbol. After paying out your regular wins for the current round, the super respin feature will begin. The rhino full stacks will remain on the screen, but all other symbols will be removed. Begin this feature with 3 respins. Only great rhino symbols are used during these respins. Every time a new great rhino symbol appears on the reels, you’ll get an additional respin. That symbol will also remain on the screen with the other ones. The feature ends when you are out of respins. All of the great rhino symbols are added together to determine your earnings.

BUT if at the end of the super respin bonus feature you’ve managed to score 14 great rhino symbols, you’ll earn the Major jackpot! This is a terrific 375x your wager. What’s more, if you get 15 great rhino symbols during the super respin bonus feature, the feature will end automatically, and you’ll be awarded the Grand jackpot. This is a fixed jackpot of 500x your wager.

The Great Rhino slot online game is made by Pragmatic Play. This software developer has a rich library of online slot games that are as entertaining in the theme department as they are lucrative in the bonus features. You can play popular titles such as John Hunter and the Book of Tut, Aztec Bonanza, and Release the Kraken. Pragmatic Play might not be as big as say Microgaming or Play ‘n Go, but it has a solid offering with top-quality games everyone seems to love.